A piezo-actuated device called a solution switcher allows researchers to investigate fast (millisecond) signaling dynamics involving the binding of agonist molecules like glutamate to cell membrane receptors. Read about why and how it is important to avoid exciting ringing vibrations in the switcher assembly. (read more ....)

As Published in Laser Focus World

The new MMF.sd “optical mount flipper” from Siskiyou Corporation is a motorized platform that enables optical components to be rapidly moved in and out of a free space beam path.  (read more ....)

Photonics technologies enable life scientists to probe samples in the increasingly sophisticated study of processes ranging from neuron signaling to heart muscle contraction, as well
as cells and cellular development. As research continues at increasingly finer levels of resolution, the requirements for optomechanical positioning become ever more demanding.
Positioning equipment manipulates the probes used to interact with biological samples. This includes positioning a light probe, such as a focused laser or LED, and positioning a physical
probe, such as an electrode or microsyringe.

Reliability and longevity directly impact the cost of using Q-switched, diode pumped, solid state, ultraviolet lasers in industrial applications. Damage to
the intracavity harmonic crystal is often the major limiting factor in the lifetime of these lasers.

Lee Laser (now part of Coherent) built a successful business featuring lamp-pumped and then diode-pumped (i.e., DPSS) solid state lasers, with powers up to 100 watts.  In a field with multiple low-cost competitors, Lee Laser was able to effectively differentiate their brand as a supplier of affordable industrial lasers featuring “workhorse” reliability. Prior to the company’s acquisition by Coherent, Lee saw this brand image threatened when some of their side-pumped DPSS lasers failed to work to specification when received by the customer.  Because of the importance of reliability to their industrial customers and to Lee’s market leadership, the company set out to identify and eradicate the source(s) of these failures.  (read more ....)

Imaging transparent, colorless specimens has always presented a challenge in optical microscopy. In many applications, it is not desirable or even possible to use fluorescent dyes, stains or transgenic probes to render target objects more visible.  While differential image contrast (DIC), often in the form of the Nomarski microscope, is widely employed, its optical complexity can cause limitations when the contrast image is combined with some other measurement modality or imaging technique (such as patch-clamp measurements or optogenetic stimulation, or even simply epi-fluorescence)..... Biophotonics 2017-11 Microscopy

Neuroscience Under the Microscope | Published Article from Novus Light

While optical microscopy methods for neuroscience have expanded significantly in recent times, traditional tools such as patch clamp technology are still widely used because they provide superior data for many types of experiments. Researchers at the AstraZeneca-Tufts Laboratory for Basic and Translational Research are using patch clamp technology to study fundamental aspects of synaptic inhibition that are associated with epileptic-type seizures. This Institute itself is an exciting new business model in the world of neuroscience research, created as a joint collaborative venture between a leading academic institution and a highly respected pharmaceutical giant. (read more .....

Press Release, as seen at electrooptics.com

Components for customising microscopes.  Siskiyou now offers a set of interchangeable modules and accessories for customising the
functionality of optical microscopes from all major manufacturers (Zeiss, Nikon, Olympus), or even for building a new microscope. (read more...)

Among the DC/servo options, the MX7000 series demonstrated the lowest amount of play and drift compatible with MyoStretcher’s target performance (measurement to 1 nN), while providing up to 20 mm of motion in each axis. A motorized actuator with anti-backlash gear-head (in each axis), driving a crossed roller-bearing highly linear stage, eliminates axial and lateral play, and a pre-loaded screw drive avoids the possibility of drift when stationary—that is, during a typical single myocyte experiment. Also, because the three-axis subsystems were originally developed for demanding electrophysiology (patch clamp) experiments, they are totally compatible with the limited access of a high-magnification optical microscope.  (read more...)

OEM Integration of the IXF1.0i, Published in Laser Focus World

High-stability flexure mounts were crucial to Opotek’s miniaturized, shippable OPO with its shipping-based technical support model (a). Thermal stability (averaged over both x and y-axes) is shown for a Siskiyou IXF1.0i monolithic flexure mount and high-stability kinematic mounts from two other manufacturers (b). Thermal performance data for the latter two are from manufacturers’ published literature. (read more...)

Press Release, as seen on Photonics.com

GRANTS PASS, Ore., April 25, 2016 — The 50.5cr crossed roller stages from Siskiyou Corp. are designed for space- or weight-constrained applications. The stages feature a non influencing foil lock mechanism, and offer a linear travel range of 12 mm and 33 × 33-mm mounting platform.
The stages are compatible with both manual and motorized actuators from Siskiyou, including 80 TPI and 100 TPI pitch screws, an ultrahigh resolution differential micrometer, and the company’s 512 series motorized actuators.  Applications include microscopy, intracavity adjustments in laser, and medical device incorporation. (read more ....)

After decades of promise and hype, but very limited market uptake, laser systems for dentistry are finally taking off.  One of the leading products is the Solea from Convergent Dental, which provides a superior alternative to the mechanical drill, plus the flexibility of several soft tissue procedures, including wound sealing, and even cutting/ osseous tissue (bone).  This article reviews the development of this system, including the use of novel optomechanics from Siskiyou Corporation to simplify system assembly, improve stability and reduce cost. (read more ....)

Several different technologies offer a range of performance options within the confines of an optical microscope for patch-clamp studies, intracellular recording and other demanding experiments in electrophysiology. (read more ....)

A simple, modular optomechanical tool breaks barriers by enabling the seamless addition and control of a secondary light source in standard microscopy setups. The cost-efficient tool facilitates not only photoactivation for optogenetics, but also extends microscope imaging capabilities. (read more ....)

GRANTS PASS, Ore., Sept. 15, 2015 — Suitable for both end users and OEMs, a dual-wavelength excitation light source from Siskiyou Corp. may be used in optongenetics and other life sciences applications.  The IS-LEDc combines the output from two LEDs (read more....)

GRANTS PASS, Or., Aug. 17, 2015 - Although product miniaturization can confer numerous practical advantages, it may create significant design issues - hurdles that need to be overcome to make the miniaturization a reality. Siskiyou Corp., a supplier of positioning equipment for life sciences and which specializes in building hardware for space- and access-restricted applications, has just solved such an obstacle. (read more....)

Electrophysiology encompasses the measurement and analysis of transient ion flows and resultant voltage changes across cellular membranes, e.g., sodium ion channels that enable nerve cell signal transmission.  A key, but often unheralded, component of these experiments is the micromanipulation system used by the researcher to maneuver the micropipettes (Read More....)

Siskiyou has expanded their Class 1000 cleanroom

Siskiyou Corporation has been awarded a US Patent (Patent No. 8,925,409) for a novel actuating mechanism that significantly improves the performance of top adjusted optical mounts and linear translation stages.  Specifically, the Siskiyou invention mechanically isolates the rotation motion of the adjustment screw from the moving part of the mount or stage, so that turning the adjustor imparts only linear, (read more ....)

The Siskiyou IS-OGP is a simple, turnkey, modular solution

2/16/15 – The Siskiyou IS-OGP is a simple, turnkey, modular solution (patent pending) for integrating an external laser beam into an existing microscope in optogenetics experiments that utilize a laser spot to stimulate target neurons in the cortex of lab animals.  Specifically, the IS‑OGP provides a means to introduce a fiber-coupled laser beam into the infinity space of leading optical microscopes having a trinocular setup (read more ....) 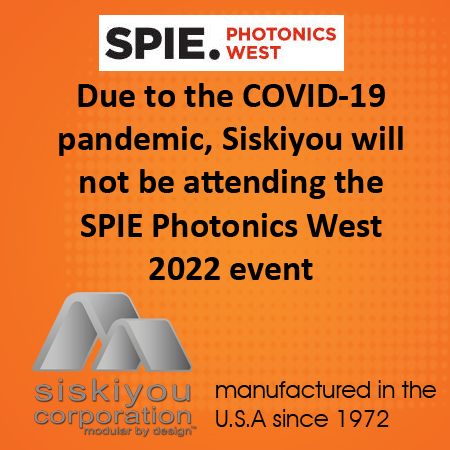